Dirty Beaches is Alex Zhang Hungtai and Alex is Dirty Beaches.  The boutique label holy-grail maker engineers tracks of dirty croon-filled depths.  His stage presence has an amalgam of personifications peering through it; although, their intention is rightfully mysterious. We saw glimpses of Chuck Berry and Elvis through the dimly lit stage and sludgy tracks.  Based out of Canada, Dirty Beaches comes through Philadelphia several times a year and we are damn lucky for it.

A Dirty Beaches show touches on auditory sensibilities difficult to define but easy to appreciate.  Blazing new trails in sonic bliss, the band graced the FUC stage on May 3rd, 2012 and delivered a reverent performance  to his musical influences and the lucky crowd.  Grinding through numerous tracks and ferociously brandishing his guitar Alex, with his Dirty Beaches bandmate, provided us with yet another exhibit behind the crime of missing his live performance.  You can beat the case by catching his July 23rd performance at Johnny Brenda’s after his Spanish tour.  In the meantime, we have some dark and dirty videos:

The Über-talented duo PS I Love You out of Kingston, Ontario played Kung Fu Necktie in Philly on October 18th and brought with it scortching guitar and precision drumming.  They played through every single song you wish you had heard and made it their last stop on their US tour. 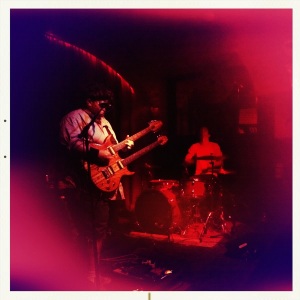 PS I Love You Live @ KFN

The band was originally a solo project for multi-instrumentalist Paul Saulnier (thus the initials PS in PS I Love You).  Now with Benjamin Nelson on drums, the project has involved into a sound larger than the two by themselves.  We enjoyed hearing these guys and appreciated their additions in song composition – extending guitar and drum solos and really playing to the crowd.

Now on Paperbag records and with Best New Song and an 8.1 album rating from Pitchfork credentials, PS I love You seems to be in place to garner increased critic-love now and into the future.  Make sure you don’t miss them on their next Philly stop.  Check out what you saw if you were there or missed if you weren’t below: